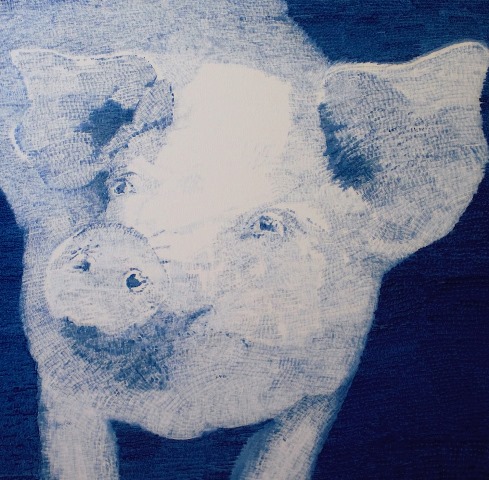 Ever Blanco Valverde was born in 1976, in San Vito, in the south of Costa Rica. Ever grew up on a farm within the vicinity of the rain forest. From an early age, he was fascinated with drawing and with wildlife. In 1995, Ever moved to New Jersey and began daily drawing practice and zen painting. He began formal art training at The Art Students League of NY, in 2006, where he became a full time student and class monitor; years of apprenticeship helped Valverde to develop a strong visual voice. Interpreting human behavior through animal imagery, his large size grayscale paintings combine environmental issues with a hint of sardonic humor. Many of his images are intentional absurdities as Ever juxtaposes the familiar with the extraordinary to inspire his audience to pay more close attention to, even to re-imagine, otherwise overlooked situations. His viewers are also transported between the worlds of the familiar/tangible to the incredulous/incongruous via his meticulous calligraphy-like brush stroke technique.


In 2012, Ever Blanco Valverde completed the Residency program at ASL Vytlacil Campus (Sparkle, NY); soon after, he obtained representation and exhibited full time at The Outside In Gallery (Piermont, NY). In the same year, he was awarded his first one man show, at Lincoln Center under the title The new vigilante, which featured a series of sixteen oil paintings depicting wild animal portraits. Ever’s second show, La Finca (The Farm) was presented at the Costa Rican Embassy in NYC in 2013. In August 2015, Ever's paintings appeared in show at the Chashama Gallery; titled The Innocents, the show included sixteen new works that took the artist two years to complete. "Valverde tames the wild…chickens are painted as royalty.” said The Village Voice. Our Beloved Animals marks his latest series of works; presented at Interchurch Center, Ever delights his viewers with paintings that expand his narrative animal imagery.